This Afternoon we Played Swingball

This afternoon we played swingball and I have to be honest and say that I really didn't want to. I'm not a great lover of the game at the best of times and this afternoon I was tired and what I really wanted to do was sit down enjoy a cup of tea and possibly have a nap but we played swingball because it was what Sammy wanted to do.  Now I'm not in the habit of giving in to Sammy's every whim and whereas looking after myself is of great importance, how can I care for someone else if I don't take care of myself, her wanting to play swingball this afternoon took priority. 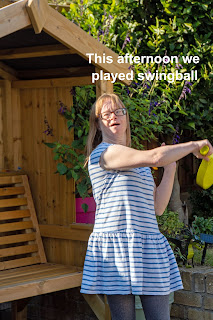 There are several reasons that it was important that I played swingball with Sammy this afternoon rather than having a nap not least being that it was her choice of activity and it is crucial that she has the opportunity to make choices about the things she wants to do when so often within our society assumptions are still made about her ability to decide things for herself.  Also I am very aware that as she gets older, Sammy is now forty seven, there is the possibility of early onset dementia as this seems to be more prevalent among people with Down Syndrome than it does among the general population.  If Sammy is going to get dementia, although this is not inevitable, it is not something I can stop but I like to think that maybe I can at least help to delay it by ensuring that she keeps both physically and mentally active and playing swingball involves not only physical movement but also the use of hand/eye coordination and as she's never quite sure which way I'm going to hit the ball back to her it is helping to keep her mentally active.  Playing swingball for us is more than just a game in a way it is a therapy and although I often wish that there was someone else to play the game with her more often and I could have a rest sometimes, if Sammy wants to play swingball and the weather is in our favour that is what we shall do.

at September 22, 2021
Email ThisBlogThis!Share to TwitterShare to FacebookShare to Pinterest