As I was driving along the other morning to drop Sammy off at the farm where she’s supported for a couple of days a week to care for the animals, serve in the barn shop and other such farm like duties we were delayed.  This delay was due to slow moving agricultural vehicles, quite the norm around here especially at this time of year as the autumn harvest is gathered in.  As we were crawling along behind these vehicles I got to thinking about how important they were even though I felt held up by them because of how slowly they were going.  I had to remember that they also had somewhere they had to be and an important job to do and just because they looked different from the cars and other vehicles and moved so much more slowly it didn’t mean that they shouldn’t be on the road.
Now I never thought that I’d be likening my daughter in any way to a maize harvester (I think that’s what it was) but here I go:  I know that Sammy is never going to be classed as a high achiever within a main stream culture due to her learning disability, although she has achieved an amazing amount throughout her life, she has abseiled down a rock face, had a paid job and traveled independently to name just a few things. It does sadly however seem that it is all too easy within our society for her and others to be dismissed and deemed as less worthwhile because they don’t meet an expected norm.  This finds me asking myself and wondering as to where we would be and what sort of society we would become without the richness and diversity that people with Down’s syndrome contribute to their communities and society in general.

To harvest maize these days it requires a maize harvester to get the job done, it’s not a job that could be done by something faster moving.  Within agriculture different machines that move at different speeds and in different ways are required to farm efficiently as within society different people are needed using their different skills, abilities and talents to enrich and grow that society.  Sammy is never going to have a high flying job but that doesn’t mean that she doesn’t gain satisfaction from what she does or contribute to her community and to general society.  I’ve never known anyone take as much pride in a neatly swept garden or a cleanly swept yard or mucked out barn as Sammy does.  She also likes to see supermarkets/shops looking neat, picking up and rehanging anything that has fallen of a rail or empty boxes that are on the floor.  To many these tasks may seem menial but societies really wouldn’t work very effectively if everybody could or was only willing to do the same things, a diversity of abilities and skills are needed.  Someone who is good at and satisfied with sweeping and clearing up after others is of equal value to someone in a high powered job, they both do things that are necessary for a society to function, they’re just different.  Like the maize harvester and a seeding machine they are very different pieces of machinery doing different jobs but complementing each other, neither one of them is less important than the other. This does not however mean that people should be denied the opportunity to aspire to their full potential and it should not be assumed that because someone has Down’s syndrome they are not capable of achieving what they set their hearts to.  There are actors, models, musicians, conference speakers and athletes, to name just a few areas of life that people with Down’s syndrome are achieving great things, assumptions should never be made about a person with the condition as they are as unique and individual as anyone else.  Sammy loves to sweep/muck out, to work on the farm and to spend time by and in the sea, she also used to love riding and was an excellent horsewoman (lumber arthritis can make riding painful for her now).  These activities are however likely to be someone else’s worst nightmare as they may love to act to dance to make music or love fashion.  It really is time to celebrate the diversity and the individuality of people with Down’s syndrome and not be guided in our opinions by an outdated stereotype of inability.

During Sammy’s lifetime I have seen a lot of positive changes in attitude taking place.  Parents of children with Down’s syndrome now have more choice about where their child will receive their education.  Sammy had no choice except to attend a school that was classified as for the educationally sub-normal.  This in itself was an advancement as it was only in 1970, four years before Sammy was born, that all children in the UK were given the right to an education.  Prior to 1970 children with Down’s syndrome had been considered as ineducable and came under the umbrella of health services rather than education.  Terminology has also changed for the better. If a label must be given Down’s syndrome is a definite improvement on the term used when Sammy was born and learning disability is a better term than mentally handicapped, with special needs/additional needs being much, much better than educationally sub-normal.  I can remember my son saying, while he was still fairly young “Mum, how can anybody say that Sammy isn’t normal, because if she was any different it wouldn’t be normal for her.”  Children often seem to see things so much more clearly than us adults and can be so much better at accepting people for who they are and not making judgement because they may be a bit different. 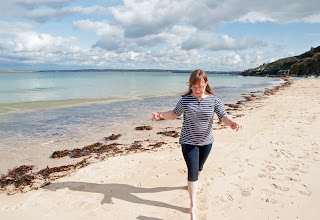 at October 14, 2017
Email ThisBlogThis!Share to TwitterShare to FacebookShare to Pinterest