What Down's Syndrome is not !

As it is currently Down's Syndrome awareness month I thought that maybe I should write a bit around the facts of Down's syndrome before it occurred to me that there is actually a lot of information out there about the condition, even if some of it is still very outdated.  So instead I thought I'd write about what Down's syndrome is not, maybe a bit about what it is and a bit about the impact forty seven years of being the mother of someone who has the condition has had on my life and what I have learnt. 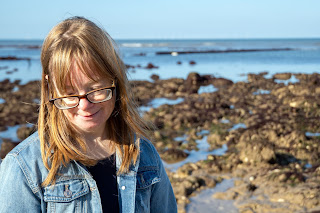 Down's Syndrome is NOT what someone is, it is a condition a person has!
Above is a photo of my eldest daughter Sammy, it was taken while we were away enjoying a short break recently and yes she has Down's syndrome but she is most defiantly not Down's syndrome, Down's or a Downy.  She is Sammy and she has Down's syndrome (trisomy 21) but more than that she is a much loved daughter, a sister, an aunt, a granddaughter, a farm helper, someone who loves to go on holiday, a bit of a film buff and so so many more things.  Down's syndrome is part of her genetic make up but it does not in itself define who she is as first and foremost she is a person as uniquely individual as any one of us.  There are certain characteristics that she has in common with other people that have Down's syndrome but she is so much more like the rest of us within the family than she is other people with the condition and her personality with her wicked laugh and her slapstick sense of humour are all very much own.
Based on my experience as Sammy's mum I have certainly learnt over the years never to make assumptions about what a person with Down syndrome will or will not be able to achieve as everyone is an individual.  When she was born I was given the worst case scenario of what her and my life was likely to be like and it wasn't a very pretty picture that was painted.  She wasn't expected to live much beyond twenty five and it was thought that as she grew her behaviour was likely to become far to difficult for me to manage and she would be unable to live at home.  How glad I am at how wrong this information was as at forty seven Sammy continues, out of choice, to live at home, enjoys an active outdoors sort of life and really is quite a gentle soul.  Okay it has been known for her to try to kick chickens or goats out of the way sometimes when working as a farm helper and she has challenged a goat with a broom before but overall she is a gentle person who enjoys her life.  Life is not without it's challenges but Sammy is not her condition, her condition is a part of her.
Down's Syndrome is NOT a disease and it is NOT contagious!
Down's syndrome is a condition that a person is born with and it was in 1886 that  John Langdon Down was accredited with fully describing the syndrome, although there are others who had described some aspects of the condition earlier than this.  It was not until 1958 however that Dr Jerome Lejeune  discovered that the occurrence of Down's syndrome is due to there being an extra copy of the twenty third chromosome hence trisomy 21.  This occurs by chance at the time of conception and in the majority of cases cannot be inherited.
There are also three types of Down's syndrome:
*Trisomy 21 occurs when each cell in the body has three separate copies of chromosome 21 instead of the usual two. This is the most common type and the type that Sammy has.
*Translocation Down's syndrome occurs when an extra part or a whole extra chromosome 21 is present but is attached to a different chromosome rather than being a separate chromosome 21.
*Mosaic Down's syndrome occurs when some cells have three copies of chromosome 21 but other cells have only two copies of the chromosome. 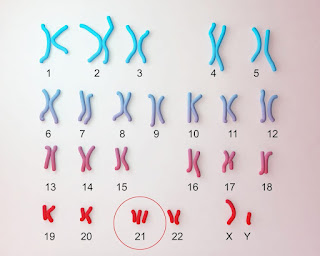 People do NOT have mild, moderate or severe Down's syndrome
A person either has Down's syndrome or they don't.  However everyone with the condition will have some degree of learning disability with this being different for each individual.
This has not always been understood though and it wasn't that long before Sammy was born in 1974 that children with Down's syndrome had became entitled to an education.  Prior to the Education Act 1970 children with Down's syndrome had been classified as uneducable and considered to be severely mentally handicapped (terminology of the time).  Even when Sammy went to school in the late 1970's I found that there was still considerable surprise at what she was able to do and learn and I believe that this was due to peoples preconceptions of the condition and due to this people had low expectations of what she could achieve.  This does seem to improved a lot since Sammy was a child with education now being much more inclusive, although sadly still in some areas there still seems to be a lack of understanding as to the worth of people with Down's syndrome, but that's a subject for another day.
Down's Syndrome is NOT something that people with it suffer from!
Although there are conditions that may be more prevalent among people with Down's syndrome that can cause varying degrees of suffering a diagnoses of Down's syndrome in itself does not condemn people to a life of suffering.   In fact most people with the condition given the opportunity lead full, active and meaningful lives, celebrating individual achievements and reaching their own individual potential and whereas everybody will not reach these heights there are actors, models, dancers, photographers, artists, campaigners, speakers, athletes, chefs, business owners as well as a young CBeebies presenter all of whom have Down's syndrome. 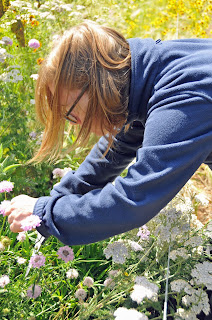 Down's syndrome is NOT scary!
Says she who was terrified and wept bucket loads of tears when first receiving Sammy's diagnoses all those years ago.  That was before I realised that she was not her diagnoses, that she was my daughter and deserved to be given every opportunity to just be herself whatever that entailed.  I think it was the not knowing what to expect never having met anyone with Down's syndrome and the only information being given was around what she wouldn't be able to do and how hard it was likely to be to raise her, how different her life was likely to be from her siblings, just so many negatives.  To be fair to the paediatrician he was only doing his job and the things he told me were what was believed at the time.  Most of the information though had been gained from research of people with Down's syndrome living in institutions and not with their families and out in the community.  I'm glad to say that it did turn out that he was a very supportive of my decision to take Sammy home and get to know her taking things one step at a time and not trying to look too far into the future.
Having my new born baby being given a diagnoses of something I'd no experience of and being given lots of negative information about the impact it would have on her life was scary  with my main fear being the fear to love her as I might lose her too soon.  I soon discovered though that raising a child with Down's syndrome was not scary and nothing to be fearful of. Although life has had it's scary moments I think most of them have been caused by my other  children rather than Sammy.  I'm not saying that life with Sammy has been free from challenges, it hasn't there's been plenty at every stage of her life and now as she gets older there are different challenges to face.  But having and raising a child with Down's syndrome is nothing to be scared of and our society should not be scared of people with Down's syndrome either but open their arms wide and embrace and value the diversity of gifts and talents that each individual brings with them and  celebrate their worth.
at October 18, 2021
Email ThisBlogThis!Share to TwitterShare to FacebookShare to Pinterest