It was way back in the late summer of 1974 that the story of our voyage begins.  I can't remember anything extraordinary about that summer before the start of our voyage, it was an average British summer weather wise, wet, windy and on the cool side with a bit of sun thrown in for good measure.  Politically there was a lot going on that year with the end of the miners strike and two general elections but I was young, happily married and expecting my second child, a brother or sister for my gorgeous little boy, life was just about perfect.  As it was before the days of routine scanning or testing all I knew was that I was expecting a baby and I so hoped for a little girl, the ideal family.

It was during the morning of the 10th September 1974 that I realised that I was in labour, it was a couple of weeks earlier than expected but that was ok my neighbour would look after my son until my Mum could get there to look after him and my husband would come to the hospital with me.  We didn't have mobile phones, we didn't even actually have a house phone then so I waited for him to come home for his lunch, before informing him that I was in labour.  I was healthy and had been for all my regular check ups so we didn't foresee any problems and expecting things to take a while he had his lunch before accompanying me on my waddle to the hospital.  I think I need to explain things a little bit here.  We lived on a military base and my husband was an Army Nurse working at the hospital which our house very close to.  In fact it was nearer to walk to the hospital than it was to the nearest phone box so we turned up unannounced.  It's just as well we went when we did as the baby wasn't hanging around, very soon after we arrived I was taken straight to the delivery room and in a very short space of time my longed for baby girl arrived.  It wasn't the joyous time I expected though, my little girl was blue and the doctor wanted to get her straight into an incubator so they whisked away and I had to wait awhile to  meet her properly.  I was cleaned up and wheeled along to the ward where my beautiful little one, she weighed in at 5lb 9oz, was thankfully brought to me once the doctors were confident that she was a healthy colour and breathing properly. As my husband had had to go and let people know that the baby had arrived earlier than expected and sort out time off my beautiful baby girl and I had some precious time to ourselves.  As I sat with her in my arms just looking at her and welcoming her to the world I got to thinking that there was something that looked different about her and it bothered me, I couldn't quite put my finger on what it was though.  I wondered if it was something to do with how quickly she'd been born and tried to convince myself that things would settle down in time, after all she was only a few hours old.  Having sorted out what he needed to and being assured that our son was ok my husband returned and it was then that a nurse let us know that the paediatrician would like to talk with us.  Calmly he explained that our daughter was a Mongoloid (remember this is 1974 and terminology has improved since then) but they would need to do a blood test to confirm whether it was Trisomy 21 or Mosaic, at that time he suspected Mosaic due to her hand and feet patterns.  It was however to be confirmed that it was Trisomy 21. There are three types of Down's Syndrome Trisomy 21, Mosaic and Translocation that I will describe in a separate post.  As he explained the implications of our daughters condition to us my world started to fall apart, I'd never even heard of the condition let alone met someone with it, I later discovered why.  There were so many emotions to start to deal with and so many questions forming, would she learn to walk? would she be able to talk?  How long would she live? and so many more.  I can't remember exactly what options we were given at the time but there was no question in my mind that my baby girl was going to be coming home with us,  I'd carried her for nearly nine months, I'd given birth to her, she was my responsibility.  Yes in the early days I was scared to love her not knowing how long she was likely to live, what quality of life she would have, or if she would become to strong and possibly to violent to be able to live with us safely.  There were so many fears to deal with and so much uncertainty but she was coming home with us and as over time as I gradually started to deal with these fears and come to love her a determination set in, this little one was going to have the best that we could give her, she might be different than I expected or thought I wanted but she deserved pretty dresses, nice shoes, good toys etc. after all first and foremost she was a little girl, my longed for little girl.

We remained in the hospital for a few days before coming home, it was then that Samantha Jane was properly introduced to her big brother and our voyage into uncharted territory truly began. 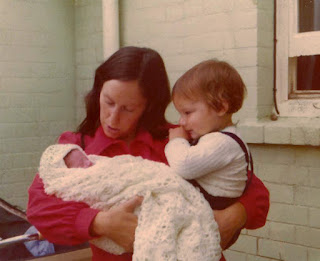 at June 25, 2017
Email ThisBlogThis!Share to TwitterShare to FacebookShare to Pinterest